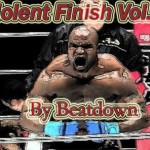 “Genghis Con” is one of the creators of the Miami Hustle series (new episodes each Monday) but before the web series, he made himself a name on Youtube for his incredible MMA highlight videos and his latest, which is entitled “violent finish”, is no exception. The 2 part video highlight features exactly what you’d expect to see based on the title; footage of some of the most devistating “finishes” in the history of the sport.

Machida on Franklin, Franklin on Quarry, Sanchez or Riggs and the Silva’s (Wanderlei and Anderson) on pretty much everyone. At the end of each video, Genghis Con does a good job showing the agony of defeat and the thrill of victory as he shows footage of both the fallen fighter being attended too by the ringside doctors as well as the victorious fighter celebrating the win. It’s a harsh sport. The highest highs and the lowest lows. Enjoy the videos..