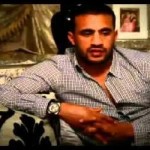 There’s quite a few Badr Hari documentaries out there (here’s another Badr Hari documentary) and like his fighting style, they’re pretty much all entertaining. Last week, a new one aired in the Netherlands and luckily for us, it has already surfaced online. The documentary was first released in Dutch language, which is why I didn’t post it sooner. However, I just noticed that a fan has added English subtitles and uploaded it to Youtube.

There’s quite a few quotable moments in the following videos but my personal favorite comes at the mid-point of part 2 (the 4:45 mark to be exact). When discussing that he thrives on the “fear” of his opponents, he says the following..

“The fear is something I thrive on. You know, when I see fighters, opponents getting smaller during the fight. Getting more insecure. Less secure about their cause. I see fighters enter as Lions and leave as Kittens. Humiliated. Nothing is worse than leaving the ring as the loser.”
Anyway, as fun as pulling quotes and describing scenes from the documentary is (it’s not), it’s probably best that you just hit play and watch it for yourselves..