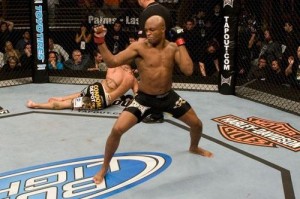 So why even bother with an analysis then?

Well, for starters ..because pound for pound rankings (and rankings in general) are irrelevant come fight time. On October 25th at UFC 90, it comes down to two trained professionals locked in a cage for 5 rounds. Their rankings based on their past accomplishments won’t help them because as we’ve seen over and over with this sport – it’s not who’s the better man/fighter, but rather, it’s who’s the better man/fighter on that given night.

On paper, Anderson Silva has a clear-cut advantage both on his feet with his Muay Thai or on the ground as he’s a seasoned black belt in Brazilian Jiu Jitsu under the Nogeuira brothers. Add to that his soaring confidence since with the exception of a single round in his fight against Dan Henderson, Anderson Silva has yet to be threatened by defeat so far in the UFC. A fighters mental state coming into a fight is equally important as his physical state and you can bet that Anderson Silva has all the confidence in the world right now.

Patrick Cote on the other hand has been flying under the radar up until this point which is surprising as he’s shown a dramatic improvement with big wins over Kendall Grove, Drew McFedries and most recently, Ricardo Almeida. Like Anderson Silva, Patrick Cote is a “complete” mixed martial artist. As a soon-to-be brown belt in Brazilian Jiu Jitsu under Fabio Holanda of Brazilian Top Team (BTT Canada), Patrick Cote is certainly well versed on the ground. While Anderson Silva has the higher belt ranking, Patrick Cote’s brown belt level BJJ should be enough to prevent being easily submitted. Patrick Cote was also able to handle Ricardo Almeida – who is thought to be one of the best BJJ practitioners in all of mixed martial arts – in his last fight at UFC 86. Since both fighters are at such a high level in Brazilian Jiu Jitsu, it should be interesting to see if their skills neutralize each other.

As mentioned above, it’s no secret that Anderson Silva is the better striker. Of course, Georges St. Pierre is a better striker than Matt Serra and we all saw what happened in their first fight. Everyone has a punches chance but in Patrick Cote’s case – he has a lot more than that. In his last fight, Patrick Cote almost knocked Drew McFedries’ head through the Octagon fence with a series of powerful rights. Patrick Cote is more confident than ever with his standup skills as he’s been training with Mark Delagratte at his Sityodtong training camp in Boston.

With regards to a standup war with Anderson Silva, Patrick Cote recently made the following statements to MMAMania.com..

We know exactly what to do, we have a good game plan. Now I just have to do it. Mark DellaGrotte will be in my corner. As a corner man, he’s already gone three times against Anderson Silva, so he knows him very well.

We know exactly what to do to beat him. Right now, it’s the time for Anderson Silva to lose and I’m the perfect opponent to do it. I ain’t scared of him. I don’t care. I just need one punch to put him away, so we’ll see what happens.

As the betting odds for this fight are reflecting, it’s no secret that Anderson Silva is a heavy favourite. However, with the odds as crazy as they are, it doesn’t make sense to bet on Anderson Silva as you would have to risk 700 to win 100. Yes, he’s the better fighter but will he be the better figher on October 25th? He may very well be but in this sport, as we’ve seen time and time again, nothing is a sure thing..