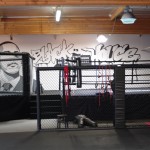 There’s not much footage online showing the training that goes on inside the “black house”, which is the training home to many of the greatest Brazilian MMA fighters. Anderson Silva, Lyoto Machida, Jose Aldo; all have sharpened their skills within the “black house” walls. In this clip, we get to see Anderson Silva and Lyoto Machida sparring with each other. Machida is preparing for a fight with Couture while Anderson Silva could potentially see GSP as his next opponent.

The original “black house” gym location was in Rio de Janeiro, Brazil but given the current success and the amount of world champions that have been produced there, they have since expanded and opened 2 satellite branches – one in Los Angeles and another in San Diego. The one in San Diego is the newest location and is run by the Noguiera brothers.