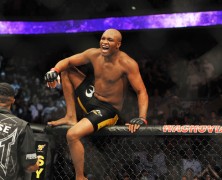 Anderson Silva, along with Yushin Okami, will be headling the fight card at UFC 134. The event will be held in Brazil on August 17th and it will be only the 2nd time the UFC has held a fight card there dispite the fact that the organization was founded by natives of the country (the Gracies).

Though it was via a disqualification (illegal upkick), Okami is officially the last man to be victorious against Anderson Silva. Since that “loss”, which occured over 5 and a half years ago, Anderson Silva has been on a tear through the UFC’s middleweight (and occasionally heavyweight) division.

He’s currently riding a 13 fight win streak in the UFC (a record in the organization) and on the 27th of August, he’ll look to cement his legacy even futher by increasing his win streak in front of his fellow Brazilians with a win over Okami.

Five years undefeated and 13 straight wins (while alternating between two weight classes) against top notch competition is an amazing accomplishment that deserves recognition. For that reason, a fan with the screen name of “leguardian” has put together a couple incredible highlight videos of Anderson Silva’s career.