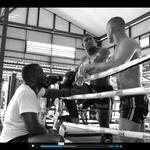 Well, I didn’t get to meet him while I was at the Golden Glory gym about a week ago since he was in Korea for the K-1 event but luckily, his latest “The Reem” episode showcases his training in Thailand and his take on Pattaya. In the video, they talk about setting up the gym in Pattaya as a pre-fight training camp for their fighters so they can get used to the time difference etc.

As Overeem says in the video, and as printed on thousands of shirts for sale, “good guys go to heaven, bad guys go to Pattaya”. He says he doesn’t partake in the seedier side of the city (which is believable seeing as how he’s with his girlfriend) but he says it’s entertaining to just sit back with a water and people watch. He also eats a “shark steak”, which is something that surprisingly, after living in Thailand for over 2 years, I’ve never even tried. Anyway, it’s a cool video so check it out. More fighters should put together videos like this that give their fans an inside look into their training camps.