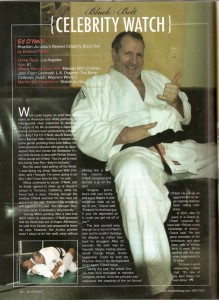 Ed O’Neill – who’s most famous for his role as the “Al Bundy” character on the “Married with Children” sitcom that ran throughout the 90’s – has been a long time practitioner of Brazilian Jiu Jitsu. He’s been studying the art for nearly 2 decades now and a few years ago, he was awarded his black belt under the Gracies.

In the video below (which was just released yesterday), O’Neill discusses he story of how he got his start with Jiu Jitsu and it’s actually quite funny. You’ll hear it all in the video but here’s a brief summary..

He was somewhat peer pressured into showing up and giving the class a try and when he did, he already had it set in his mind that he was going to leave after 10 minutes because in his own words, he was a big boxing and wrestling fan and didn’t think much of the guys who trained in their “pajamas”.

When he showed up, he was told to lie on his back and invision that him and his family were being attacked. “Do you think you can stand up?” he was asked. “Sure” O’neill said with the false confidence he obtained from playing football. He tried and of course, he failed.

Then, the sides were reversed and O’Neill was in the top position and was asked if he thought he would be able to hold one of the Gracies down for 3 seconds. He attempted the challenge and once again, was proven that the art was effective.

From that point on, O’Neill was intrigued enough to sign up for lessons and it’s with the Gracie family and their art where he eventually found his passion. Anyway, here’s the video..