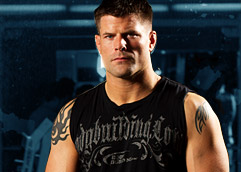 He just finished Jorge Santiago at UFC 130 and moved himself one step closer to a title shot against Anderson Silva. He’s a military vet who was awarded was award the “silver star” for his efforts in Iraq – which is the third highest award for valor in combat. He was personally thanked by George Bush in one of his presidential speeches and given his military accomplishments, charisma and fighting ability, Brian Stann is extremely valuable to the UFC and I expect we’ll be seeing his star rise due to some heavy promotion by the the “UFC hype machine”.

To top it off, the US army is a UFC sponsor (as you may have guessed by the military ads being run on every single pay per view and Spike TV event). Since Brian Stann is a soldier/fighter hybrid so to speak, he makes for the perfect representative for both the US Military and the UFC. He definitely someone us MMA fans will be seeing a lot more of so I figured it was a good time to post up part 1 of a mini documentary appropriately titled “Who is Brian Stann?”. Enjoy..