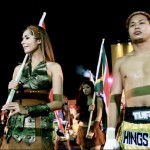 Yesterday was the King of Thailand’s 83rd birthday and to celebrate, thousands of people (myself included) flocked to the tribute ceremonies to pay their respect, eat good food and check out the entertainment. In my case, the entertainment venue of choice was a Muay Thai ring in the middle of a field. The event was the annual “Kings Cup”, which featured an 8 man tournament. Some of the top fighters in the sport participated and in the end, it came down to Yodsanklai Fairtex and Cosmo Alexandre. Both guys put up a great fight but in the end, it was Yodsanklai who walked away with the victory (he’s been on a tear lately). Anyway, here’s the video..